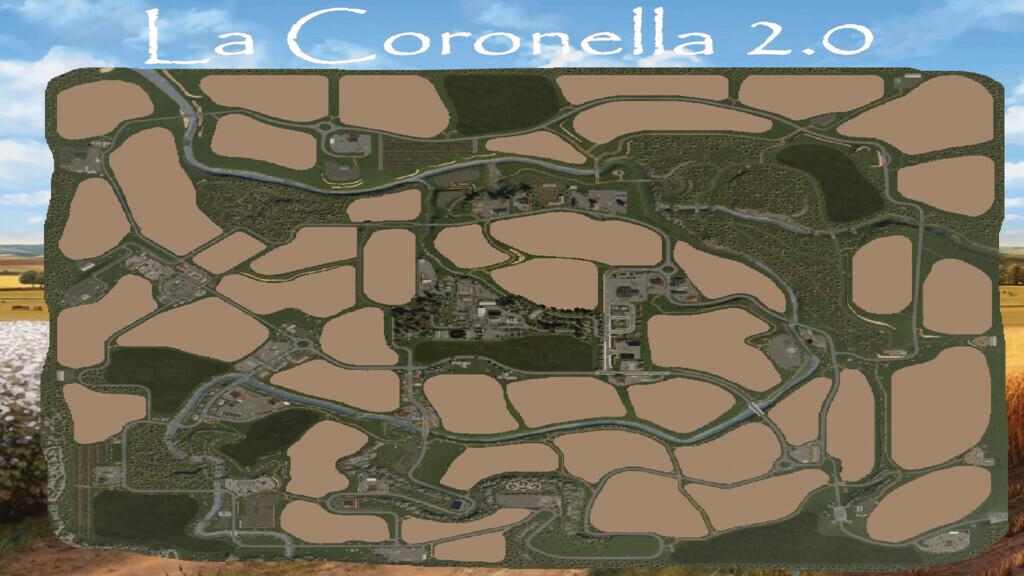 Changelog 1.0.3.0:
-The height of the Supermarket point of sale was adjusted.
-The intensity and scale of some lights that were included in the farm in the previous version were readjusted.
-The height of some buildings was modified.
-Added animation in the Lake. The water level will rise or fall at certain times of the day.
-Now you can sell the chickpea straw at La Coronella, Fertilan and El Pajar.

Changelog 1.0.2.0:
-The flashing that console players suffered (PS4) disappeared in the previous version.
-It was added the option to be able to buy the unusable area of the map.
-Improved the lighting in the Farm.
-Added new streetlights and spotlights in the Farm.
-Now the products from the factories will sell a little faster.
-Various objects were relocated.
-The Chicken Navigation Mesh was modified.
-The Distribution Center was modified.
-The discharge points of the Supermarket and Distribution Center were adjusted.
-Various textures were redirected to the base game.
-Unused textures have been removed.
-The distance textures of Chickpeas and Lentils have been modified.
-The size of the .zip file under 30Mb.

Changelog 1.0.1.0:
-The map becomes compatible with Seasons Mod, although you will not be able to use the factories, since now I have to configure all the operation of them again,
since the Seasons Mod completely changes the operation of animals.
-The factories are on the map, but they will not work as they should, so I ask you please a little patience while I get them to work correctly.
-Now you will have to choose between Seasons Mod or Straw Harvest, it has been impossible for me to make the map compatible with these 2 mods at the same time without changing anything of the
new products or factories.
-Added Seasons mask.
-The weight of the pallets of the factories has been reduced in order to be able to handle them better with tractors with a loader.
-Remember: The factories, even if they are inside the map, will not work correctly if you play with Seasons Mod, for now, to use the factories you must play without Seasons Mod Activated.
-The use of Geo La Coronella 2.0 is recommended, which adds the new crops included in this map.
-Textures of various buildings were modified.
-Some Winter contracts were included.
-Snow layer added to some buildings.
-A farm house was added.
-Try to have the automatic vehicle start option activated when using the Straw and Hay warehouses. Remember that immediately after starting the
unloading in the area you must enter the warehouse to start the animation and the collection of the product from the floor.
-Removed the possibility of buying unusable land on the map.
-Fixed bug where you couldn’t buy placeable animal stables. Now you can place up to 3 or 4 animal stables. It is not possible to increase
this amount due to the factory system.
-Some decoration objects have been added around the map, especially to the north and east of the map.
-Adjusted various map objects such as rocks, buildings and miscellaneous objects in order to improve the placement of placeable objects within the areas
enabled to do so.
-The chimney smoke animation has been removed because it is suspected of being the cause of the flashes on PS4, if it is the case that these flashes continue to appear,
these fumes will be repositioned in future map updates.
-The start vehicles were modified.
-Even if you don’t use Seasons Mod, surely this update requires a new save.

Welcome to La Coronella 2.0. This map is an improved and expanded version of La Coronella. On this map you can get the most
Farming Simulator 19. The map has undergone important changes with respect to its predecessor, here you can enjoy 2 new crops, El Garbanzo and La Lenteja,
in addition, in the Farm you will be able to use pre-installed silos to store almost all the basic game products and the new ones present here. The map is translated into
English, German, French, Italian, Portuguese and of course in Spanish.I wish you a happy game and enjoy simulated farming.