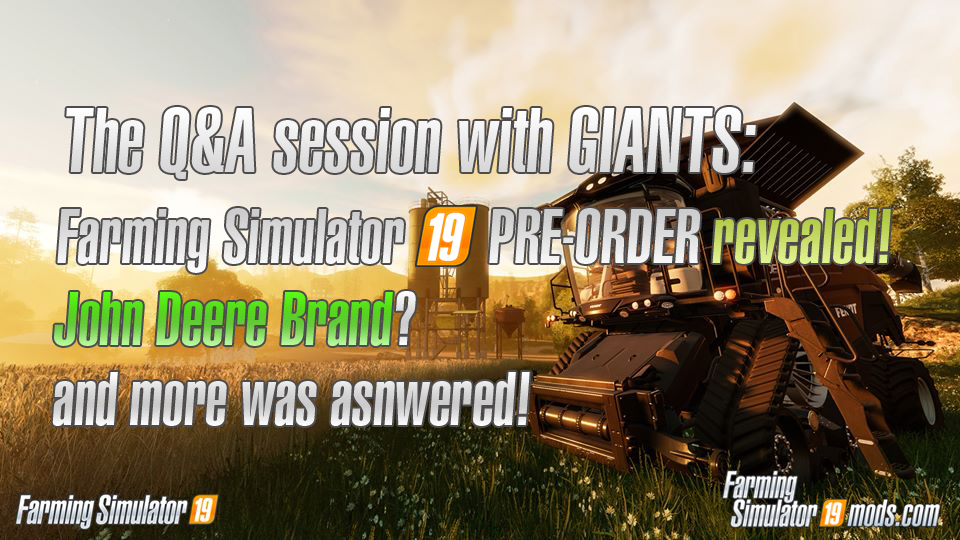 We have collected all questions which were answered by Stegei GIANTS Software (CTO) and other guys from GIANTS, who have the rights to answer such questions. So please understand that these are the facts, not rumours.

It’s really hard to remember all keyboard shortcuts. Any improvements for it?

Concerning key assignment I can already reveal something, in the Farming Simulator 19 you will be able to search/find shortcuts during the game. – says Stegei GIANTS Software (CTO)

I’ve heard in a youtube video about Farming Simulator that Giants engine actually based on Unity engine. Is that correct?
Asking just to have a legit information instead of some made up story.

How much I hate this, because it’s not even a rumour, it’s a communication mistake that happened somewhere.
It’s not. It’s build by our founders on their own. As far as I know, it was a study project. So it’s our very own Giants Engine. The truth is: Our game needs a lot of things other engines can’t do (and, of course, does not need things other engines can do), so we basically need our own engine otherwise developing new things for FS would be a pain in the… uhm.. head… 🙂

I think it means that the AGCO Ideal harvester is confirmed then? someone correct me if i’m wrong.

Will we be able to have it as a Massey Ferguson IDEAL, or just a Fendt? Will there be an option for wheels, or just crawler tracks?

He will be available as Massey Ferguson as well. Not sure about the wheels, sorry.

I’ve seen the “oh look we made the tractor green” posts as well. I’ve also seen one where the colours are clearly Fendt and one with silver wheels, so depending on where you are, it will either be a JD, a Fendt, a JCB or.. I forgot what the last one was I saw.

I love that people speculate, but to avoid disappointment, I highly recommend only listen to our announcements when it comes to new brands.

So does it mean you don’t have licenses for JD right now?

We know people love JD, that doesn’t help as long as we don’t have the license.

Would like to see a few comparison shots such as standard ps4/ xbox one 17 vs 19 and then ps4 pro/ xbox x 17 to 19 to see the true changes for console not just a high end pc in game image.

We don’t have a console version, yet. We will however, show some FS17 vs 19 shots soon.

Sun and Moon is mowing on PC. Will it move on PS4 / XB1 too? Do we have slots still?

We will add some things to Farming Simulator 19 that, at least in my book, will change a lot. Even the things we’ve already announced do that (for me at least). Like a real sky with a moving sun and moon? With clouds that turn grey before it rains so you can predict that? Might not sound like much for some of you, but for me that’s a big deal. The graphic looks INSANE compared to FS17 (I’m not kidding, I’ll show a comparison as soon as I can), we will have horses and.. well… woof woof .. (I didn’t announce anything here!) .. also character customization … these things make a difefrence already and we haven’t even started to tell you guys what’s coming.

Can you tell us something about system requirements?

Not yet. We are still in early development, so no specifics.

They will be higher than FS17 for sure, but we will do our best to support older systems as well. However, if your system rund FS17 on minimum only, Farming Simulator 19 will most likely not run at all.

Will Farming Simulator 19 be optimized for AMD video-card??

We will optimize as much as we can, no worries.

Will the vehicles have the interactive dashboard lights? It’s a really small thing that will make many people happier

When can we expect to pre-order Farming Simulator 19?

I can’t answer that, but based on experience, I’d say around E3 ish? (so June)

What about Farming Simulator 19 mod maps? Are current mod maps likely to need a complete new creation from the ground up due to the uprated engine, or might a reasonably simple update be possible by mapmakers, to get an FS17 map running in Farming Simulator 19? Any idea on this at this early stage, thanks?

From what I understand: No, no complete recreation, however they will need some work. We will talk in detail about how to create/transform mods for FS19 at FarmCon this summer, so we will have more details by then.

I might sound bold and a bit harsh but I would prefer that Giants team stop testing mods for fs17 now and focus their full potential on upcoming FS 19. I just would like to see Farming Simulator 19 to be epic and really game changing experience version of Farming Simulator.

We have no plans to drop mod testing anytime soon, however it will be a bit slower once we start going all in on FS19 testing. QA can handle both for now, but once FS19 gets more into shape that will change and we will see how this turns out.

There are pros and cons and I can tell you the topic of VR comes up every other month here at GIANTS, so we know it could be cool.

HOWEVER, real talk: It’s a ton of work to make a game VR ready and we have to decide if we want to spend that time on it or not. Keep in mind we are a small company, so dedicating someone to a VR port would take time from the development of other features that, quite franky, we think are more important than VR right now.

The real question is: Is it worth droping things for VR? As we are a company we would have to go with: Will we sell enough copys of the game to VR players who would not have bought the game to justify the workload? The answer is: who knows? We don’t, but we feel that focusing on features like horses ect. is the right call right now.

So this is supposed to be this great graphic you’re talking about? A few post-process effects and that’s it. The same trees from LS17 and still ghastly textures. The Bloom effect is far too exaggerated, even the Fendt logo on the right side shines, do not you notice something like that? Really bad.
The same scene can be a lot nicer in LS17 with Reshade.

But you already realize that this is still an alpha screenshot? The trees are far from finished and also on everything else the work is not finished. I doubt that Reshade raises the graphics to LS19 level, which we will prove more often in the future.

Is it planned to port the Farming Simulator 19 also for the Nintendo Switch?

At least not right away. The switch version is still quite new. But you can not exclude it. As soon as we have more information you will get it of course.

Please can you confirm that horses will be in Farming Simulator 19?

I here with officially confirm horses in FS19! They will be in FS19! No joke, Horses will be part of Farming Simulator 19.

Can you  please share any of the new brands with us ?

There are some things that are pretty much set in stone when it comes to brands for FS19, there are also brands we are still in the talks with. We will announce them at a later date (for some of them it might be very late).

Same goes for more features and stuff. I know you guys would love to know more about the game, but I don’t have much to say right now. Let me give you a short overview about why (a very simplified version, but yeah).

So there is the feature list in our office OK? It’s a list where a lot of people have added things they want for Farming Simulator 19. It’s a looooong list. I, myself, added the stuff from our FS19 forum threads, as I’m your voice in our company, that’s what I’m here for.

Of course they are sorted by priority. Starting at the top, our bosses will take the features and assign them to teams (or people will point at one and say: I can do that!)
Then we start developing them.
Sometimes they work, sometimes they work more or less and sometimes they don’t.
Once they are done, we work down the priority path.

So that means, at this stage in development, not all features have been decided. Sure that was a VERY simplified version of how it’s actually happening (and priorities get shifted around, sometimes low prioroty things are so easy to do that they get done anyway ect ect so yeah.. very very simplified), but that’s how every game in the world gets developed 😀 (more or less).

So once we have stuff we can talk about, we will.

There is one more layer: Marketing. Let’s give a simple example here: This trailer.

As you might imagine, creating a trailer like this is expensive. Even IF I had things to announce right now, I wouldn’t, as the focus this week is clearly the trailer and the FS19 announcement, otherwise marketing would kill me (and that’s easy for them, I’m part of the team so they sit around me). Some announcements need a good timing.

A prime example in the gaming sector is E3 in June. That’s where all major game companies announce things like new games ect. Do you wonder if there will be a new Elder Scrolls game? E3 will tell you. Ever thought about EA and what their next Star Wars game could be? Keep an eye on E3 … ect. That’s pure marketing and sure, our company is no different, sometimes things are not announced for marketing reasons.

As of now, however, most things are not announced because we are still in early development 🙂